Ever wondered what it’s like to play alongside a world class musician?

Each month we will be hosting a different brass band legend from across the UK, as they take their place in our band for one night only. Throughout the evening we will be drawing on our guest’s immense experience and expertise, to guide our operation and development as a band from within. Practical and anecdotal insight will be on offer as well as the obvious benefits of playing alongside someone who performs at the very highest level.

Hosted and conducted by Ryan Breen, these rehearsals are an ‘open door’ – we welcome anyone who may want to either play with us in the band, or just grab a drink and listen from the comfort of our seating area. For more information please contact us

In March we welcomed the amazing Alex Thomas and enjoyed an incredible night of inspirational demonstration, advice and guidance. In 2002, Alex joined to the Yorkshire Building Society Brass Band. The band won many prestigious titles during the years which followed, including the European Championship in 2003 and 2004, The British Open Championship in 2003, and the All England Masters Championship in 2004. During this time they also recorded many award winning CDs, and the band became the number one ranked brass band in the world. Alex has performed as a soloist throughout the UK, in America, Canada, across Europe, in Australia and in Japan, as well as being a soloist on BBC Radio 2’s “Listen to the band” programme. He won the British Open Solo Championships in 2004 as well as the Best Bb Cornet title, which allowed him to travel to Australia, representing Britain in the Ern Keller

Proof that the tuba, the comedian of the orchestra, is a credible solo instrument abounds in the brilliance of Neish” Classical Music MagazineLes Neish has created a career as a soloist, chamber musician and educator with a world-wide reputation. Known for his musicianship, artistry and high level of communication, Les dazzles audiences with fabulous technique and stunning musicianship.

9th May 2022 sees the Soprano Cornet extraordinaire Ben Richerton ex Black Dyke come to our band room to offer his expertise and sublime musicianship from the very top of the band!

Keep following to find out who will be visiting in June and onwards …!!!!

25th March 2022 was our final concert with our conductor Joshua Hughes, who has been with the band for the past 3 years and seen us though Christmas concerts dressed as an elf, summer concerts in the great British weather, and helped the band to develop a reputation for entertainment with his own unique flair. We would like to thank Josh for the work he has put in leading and developing the band. We wish him all the best for the future.

On Saturday 29th January 2022 Golborne Band was delighted to host its first Area Preview Night, featuring several bands from across the region. Bandsmen and their supporters joined Golborne Band at their new rehearsal venue Golborne Community Club, where each band performed their test piece to gain some valuable feedback from adjudicator Andrew Berryman.

The band are delighted with how the event went and would like to thank the bands who took part, and their supporters for making the night such a success. Special thanks also go to Andrew Berryman for taking the time from his busy schedule to attend the event and provide constructive feedback to help the bands build a strong performance ahead of the Regional Areas contest at the end of February.

Bands featured on the night were: 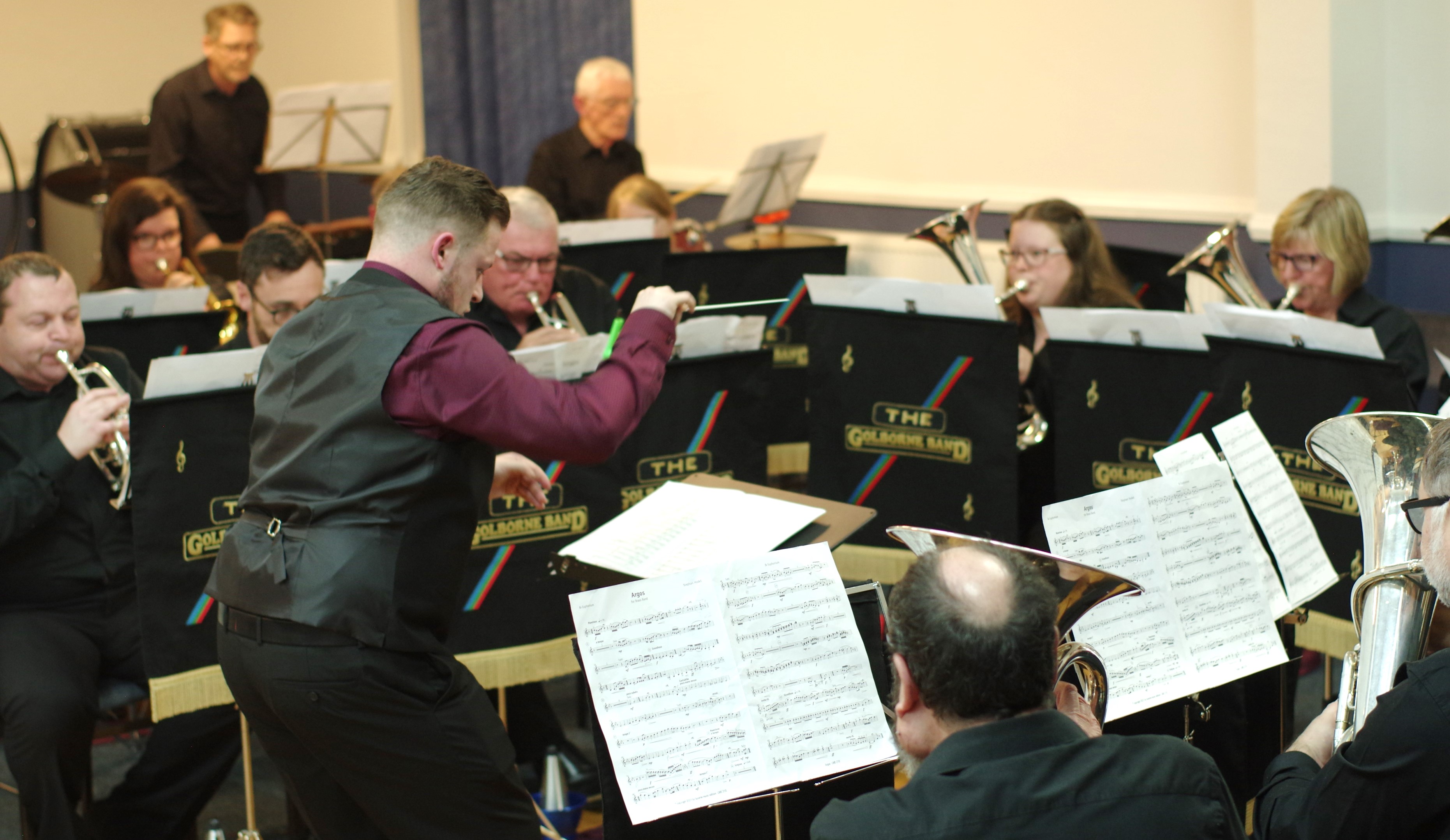 From 7th-9th January, Golborne Band braced the biting east-coast winds and headed to Butlin’s Skegness to take part in the Butlin’s Mineworkers Brass Band Contest 2022. The band played a 20-minute entertainment programme designed to take the audience’s mind off the cold January weather and focus on warmer and happier times. The programme featured:

The band were very proud of their achievement, with new favourite word from the weekend being “louche” (defined as disreputable or sordid in a rakish or appealing way) used to describe the Chairman’s solo. After a quick vocabulary lesson, the band were delighted to learn that they had won the 4th Section, taking home the prize money, and trophy for the highest placed mining band. On the victory, MD Joshua Hughes said “I’m extremely proud of the band’s victory. We are determined to do well at the North West Regional Championships”. No rest for the wicked ‘ey!